Rep. Dunnigan presented his healthcare expansion bill earlier this week on Monday in a committee hearing. After Rep. Dunnigan’s presentation, many members of the public spoke on behalf of the bill. Fortunately, HB 437 passed the Business and Labor standing committee with a roll call vote of 9 – 4. Below is a transcript of Keith McMullin and Kimal James’ comments, who both came to speak on behalf of the bill. To hear more of the Business and Labor standing committee meeting, follow this link.

“Mr. Chairman, committee members, my name is Keith McMullin. I am here representing the Salt Lake Chamber of Commerce. I am the President and Chief Executive Officer of Deseret Management Corporation and I am here on my own personal account. I am pleased with the efforts of Rep. Dunnigan in bringing this particular bill forward.

Some years ago I had the privilege of sitting in the company of a very prominent leader in this state, who has since passed away. As we spoke about some of the political turmoil around the world and the efforts that were being made to assuage the grief and incident thereto.

He made an observation which has stayed with me which I think is an important matter as it pertains to this particular initiative. He said, “I refuse to let political considerations set bounds to my charity.” I took note of that and feel that it has been a good guide in my own personal life. I think it adds to good governance, as well.

Furthermore, I would like to take a moment and put a face to those who have been spoken about here and who are addressed in this bill by Rep. Dunnigan. As I drive to my place of employment on a daily basis, I often see those who are in the categories of the mentally ill, or the tragic transient, or those who have come out of institutions in this state or elsewhere and carry with them the burdens of past misbehavior.

Often, I see these individuals on our streets coping with demons that only they can understand and that go unobserved by those passing by except for their unusual behavior, that is the unusual behavior of those who suffer from mental illness.

I have watched the men and women who carry the homeless burden upon their shoulders and I know the reasons therefore, I know the consequences thereof, and I know that they are in circumstances that prohibit them from easily accessing the kind of care that most of us are accustomed to in one form or another.

Three weeks ago, I buried a good friend of mine, a man who spent some 10 years in a federal prison. I watched him as he was discharged from that federal prison. I saw him try to get his feet back under him so to speak. He suffered from diabetes, a condition that worsened while he was incarcerated. As he came out of incarceration and tried to put his life back together, he was faced with unemployment challenges, the lack of essential benefits, and nowhere to turn in this state to help him on his way to recovery. I helped put him up for some time. I hired him, put him to work. I dealt with his mistakes as he tried to put his life back together and as I said three weeks ago, I stood at his graveside and spoke at his graveside service.

Furthermore, I speak on behalf of the business community as represented by the Salt Lake Chamber. This is good for business. For those who are in our community who find themselves retrained and reestablished add to the workforce and contribute in a constructive way to the benefit of the society in which we live, to the state as a whole.

And so without reservation, I commend to you the difficult task of addressing the problems faced with those in need and for your courage in doing so, I commend Rep. Dunnigan for that work which he has done, which I believe is good governance and hope this piece of legislation will find favorable consideration. Thank you very much.”

“My name is Kimal James. I’m the pastor of the First United Methodist Church in the Odgen area in Marriott-Slaterville. I want to speak in favor of this bill. As a pastor, I have people in my congregation who suffer from mental illness and other physical problems,  and people who have adult children who suffer from these problems. They suffer greatly because they don’t know how to help them when the system doesn’t provide for them an economic way to have the care that they need.

As a pastor of a church, I tend to think in spiritual way. The bible came to my mind, the gospel story from Luke chapter 6 of when Jesus healed a man with a withered hand in a synagogue on the Sabbath day.

Jesus broke the traditional law in order to take care of a man whose need was great. Some could have said, “Why didn’t Jesus wait til the next day when it wouldn’t have been breaking the law and the tradition?” I think that Jesus broke the law that day in order to heal that man because he had the opportunity to do what was right then. Maybe the next day, the opportunity would be gone.

I urge you to take the opportunity that is at hand right now. Make a difference for these people. It’s much bigger than physical, and even mental health and substance abuse. These things rob a person’s spirit and they rob the spirits of the people who love them: the parents, the siblings, the grandparents who need help for their family members.

I urge you to help these people now. The opportunity is here for you to do this. Thank you.” 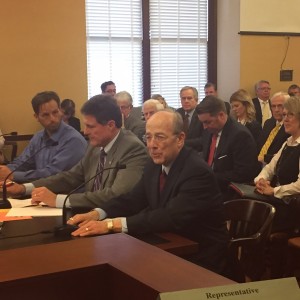