Interview on the Doug Wright Show 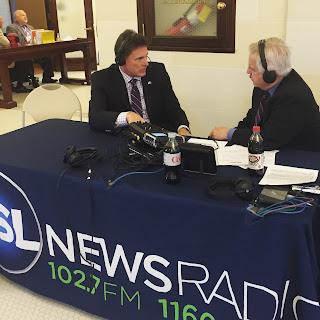 Rep. Dunnigan was interviewed live on the Doug Wright Show yesterday morning. Doug’s questions were about Medicaid and the likelihood of something being done about the coverage gap this legislative session. The following is an excerpt from the interview:

Doug Wright
Your name has been very very closely associated with the Medicaid efforts and where do we stand? Because honestly Jim, there is some frustration. This frustration with me, that we have any where from 70,000 to 125,000 of our Utahans that are kind of floating out there in the 0-Zone. Is something going to happen?

Rep. Dunnigan
Thank you for that question. So let’s talk a little bit about the coverage gap. The coverage gap are those folks between 0 percent of poverty and 100 percent of poverty. You need to hit 100% of poverty in order to get subsidies from the Federal government. So below that, they’re not eligible for subsidies. In Utah it they’re childless adults, they are not eligible for Medicaid. If you have children, up to have 44% of poverty, you are eligible for Medicaid. So, we have about 63,000 Utahans that we think would enroll in Medicaid if we offered coverage in the coverage gap. Of those 63,000, about 20,000 have coverage already. 7,000 of them through employers. So that leaves us with about 43,000 Utahans that we think would enroll that don’t have insurance today. As you know we have spent hours and hours and hours on Medicaid. There’s uncertainty with the federal government not living up with their financial end of the bargain. We’ve met with our Congressional delegation last month and they’ve all said don’t count on us living up to that financial commitment. That said, there are several concepts and ideas that are percolating and being worked on this session and I’m hopeful that we’ll be able to accomplish something. I don’t know that we’ll do everything that everybody wants, but of those 43,000 that don’t have insurance in the coverage gap, I would like us to take a meaningful step to get them covered.

Doug Wright
What is the likelihood of something really getting done before this session ends?

Rep. Dunnigan
I think there is a good likelihood that we’ll get something done. The problem we have people that want to have everything and as you load up more bills and more whistles, pretty soon it just sinks. I’m working on a plan to take a good bite of those out of the uninsured and there are other plans out there. I think it’s doable to get something done.

If you would like to hear the entire interview, follow this link and listen for free on iTunes. His interview begins at 52:30 on the first hour of the Tuesday, January 26th Doug Wright Podcast.